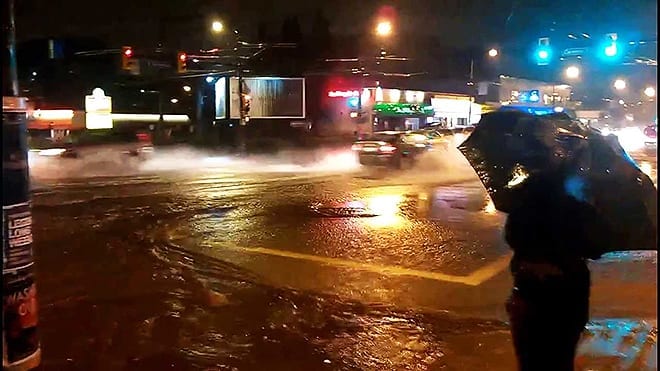 A downpour of rain muddied the pavement of East Hastings as a shivering woman whipped through the sinister pathways. Her black wool coat was sticking to her layer of fraying plaid underneath and a mixture of rain and sweat wiped away her day-old makeup. Her steps were meticulous as she weaved around used needles that littered the filthy pavement. Each stride was plotted and determined.

The effects of her abuse had taken its toll. She had lost most of the youth in her face and the crack had rotted away any discernable features. Her skin drooped on her bones, melting with age. Her hair was tied back in a tight bun, perhaps intended to pull back her sagging skin, and it made her look stern and unfeeling – precisely the appearance she needed for this area of town.

She stopped in front of an apartment complex. It was a large brick building on the edge of the street, crowded by a group of junkies. They were surrounding a makeshift fire pit, competing for heat. They glanced briefly in her direction and the woman saw a drawn out sadness in their eyes. She didn’t pity them. They’d made their mistakes, just as she’d made hers. It wasn’t her business. She kept walking.

She passed the crowd, reached the large doors, and rang the buzzer of an “Ed Schnell.” Two buzzes in. No answer. She huffed and cupped her hands over her mouth to warm them. Four buzzes in. Nothing. Fear built up. She wasn’t going to get her fix. Fuck. Fuckfuckfuckfuck. She rang the buzzer repeatedly in one last cry for help.

“What… whadayawant?” replied a groggy voice on the other end.

“Oh for fuck’s sakes, kid. Come in.” The buzzer rang and the door opened.

She allowed herself to smile quickly and bounced up the stairs to Ed’s apartment. Regaining her composure, she cleared her throat and knocked.

The door opened, startling her. On the other side of the entryway she saw her dealer. He was a giant, at least six-foot-five, and he terrified her. He wearing an old Arctic Monkeys t-shirt covered in holes and a few greyish white stains that she didn’t even want to think about.

“Hi, Ed. Have you got anything for me today? I just got paid.”

He scoffed at that. “Child support? Poor kid.” He laughed unkindly at his own remark.

“That’s not really any of your business, Ed.”

He shot her a glare and retreated into his apartment. He came back a few moments later, covering up a plastic bag of packets tied together by elastic bands. She shook unwillingly in anticipation at the sight of it. She had waited two weeks.

She reached for her purchase but he held out his hand instead.

“Jesus, relax. I’m not gipping you or anything.” That was the wrong thing to say. She lowered her head and handed him a paper bag. He peered inside and pulled out a few crumpled dollar bills.

“Aight. This’ll get you two days worth.” This was a rip-off but she wasn’t about to argue with him.

“Sure. Fine.” He handed her a rock and shut the door.

Once out of the apartment building, she scanned the street before her departure. She froze when she saw a young boy rambling up to her. Her son. He pounded on her stomach, sobbing.

“What are you doing? Why didn’t you come home, Mom?!” the boy cried.

“When the fuck did you get here, Louie? Go home-“

“And what? Wait for you there? I want you to come home with me!”

She felt immediately guilty, but her guilt evaporated into replacement of annoyance. What she chose to do was none of this kid’s business. She took her son’s face in her wiry hands and stared.

“Louie. Fuck off. This is my life, not yours.” Her son’s face changed suddenly to anger.

“Fine! Why should you care about me? You never have! You’re pathetic.” Her son wrenched himself from her grasp and fled, disappearing.

A trembling teenage boy clung to his hand-me-down winter coat as he walked through the crossing of East Hastings and Main Street. He wasn’t an idiot. He knew what his mother had been up to, coming home at daybreak, wobbly, incoherent, and completely out of it. He knew what he had to say to her, but he also knew that she’d never listen to him anyways. She wasn’t a mother to him. At this point she was merely a figment in his life – a ghost who once loved him, but turned her back for the call of something more exciting than parenthood. He was bitter and didn’t care if she knew it. Her selfishness had robbed him of a childhood.

This place was terrifying. He’d taken a cab down to Chinatown after sitting at home, alone, for four hours, waiting for his mother to come back. The fourteen-year-old boy stood out in the crowd, with his wide, bewildered face. Why did I come down here? I’m going to die. My mom’s probably dead too. He ran down the pavement; condoms, paper bags, grime, bodily fluids stuck to his shoe. He knew well enough to avoid the needles. He saw a street that used to be vibrant. There were hair salons, stores, and apartment buildings, but the liveliness was long since decimated and the street was swallowed by desperation. In the gutter he saw a deflated “Happy Birthday” balloon flapping in the wind. Its metallic sheen was the only vibrancy that seemed to remain in both the scenery and the people.

He walked towards the edge of Main Street, back to Chinatown. Suddenly, a scarred hand grasped his shoulder.

“Ey, yah a’ight?” spoke an elderly man, clad in a fraying linen coat, well worn to the point of near seamlessness. Stolen, the boy thought.

“Y-yeah. I’m fine.” He said, attempting to free himself from the man’s grasp.

The man’s hand tightened. “Y’got some change on ya, bud?”

He grasped his cab change in his pocket protectively. “No, I don’t. I’m sorry.” The man released his grip and the boy kept walking.

He was fraught with worry and desperation and began to cry at the thought of his mother lying dead in an alleyway somewhere. He sat down on a curb next to a large brick warehouse. He glanced at his surroundings. There was a frightening group of people outside of it that looked like the man who grabbed him. He pulled his hood over his head to avoid interaction. The boy had given up. His mother wasn’t here.

He got up and started making his way back towards Chinatown to catch a cab back home. He peered once more at the old warehouse on Main to see a person evacuating. It was a woman. He peered closer. It couldn’t be. His mother was emerging from the building.

In this wisp of luck, he took his chances and charged towards her. All of his repressed anger and neglect flooded over him, and he clung to the woman, who stood, solid from shock. His fresh tears melted into her soaking black coat and the boy smelt a mixture of salt and rain. He pounded on her stomach. His shaking fists did no harm to her, but he needed to know if she could feel something.

“What are you doing?” He sobbed. “Why didn’t you come home like you said you would, Mom?”

She ignored his question. “How the fuck did you get here, Louie? Go home.”

She was brushing him off. No. Not this time. “And, what? Wait for you there? I want you to come home with me, Mom!” He cried into her shoulder harder.

She took his cheeks in her palms and looked at him. His face softened. Maybe now she’d apologize. Maybe I’ll finally have a mom again.

Her eyes turned pitch black. “Louie, fuck off. This is my life. Not yours.”

This wasn’t the first time she’d said that to him and it wouldn’t be the last.

“Fine!” He shouted. “Why should you care about me, Mom?! You never have!” He was about to say his rehearsed speech – everything he’d wanted to call her out on, but what was the point? “You’re pathetic.” He ripped himself away from the woman and ran. Anywhere away from her.

I'm the Arts and Culture Editor, as well as a writer when I'm not feeling lazy, outspoken feminist, and self-appointed cat queen.