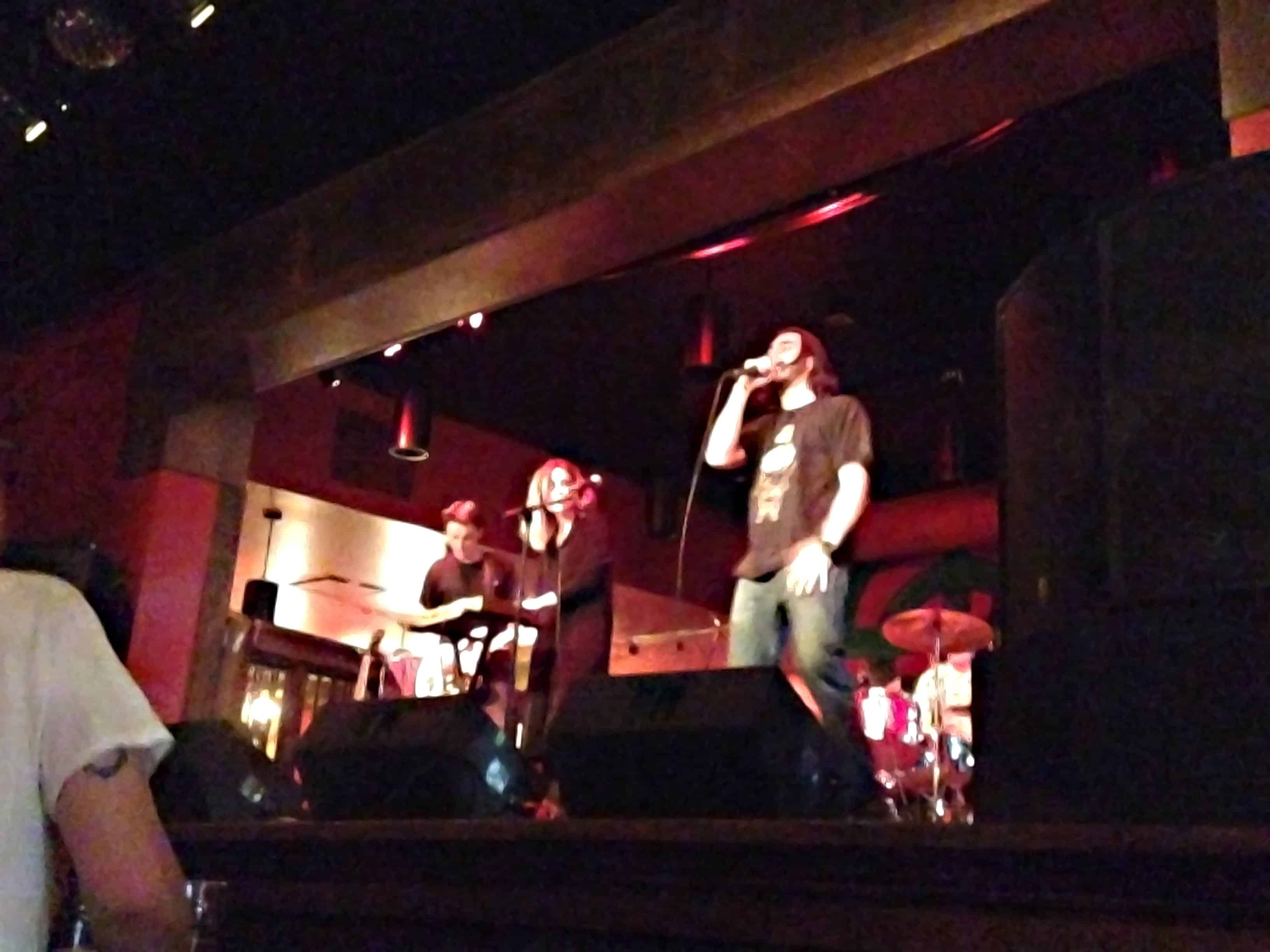 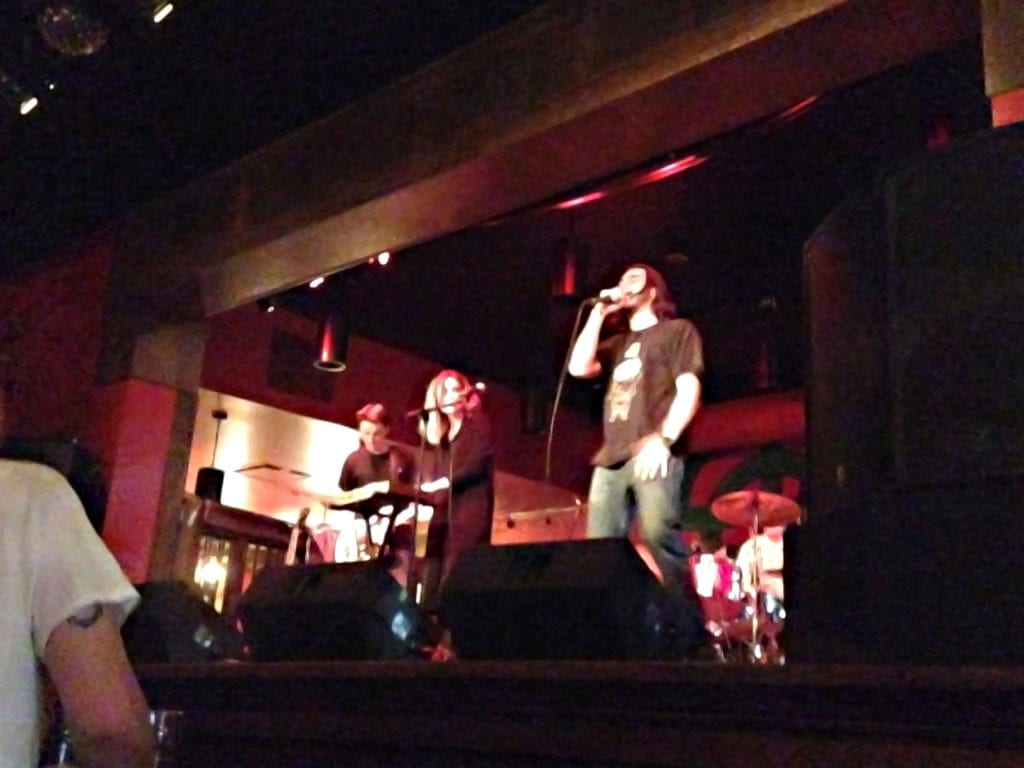 Regina’s music scene has a wide variety of different genres that caters to many groups of music fans. Each band brings something unique to the community and that can definitely be said for Hoodoo. Heavily influenced by jazz, blues, and hip hop, Hoodoo’s sound is a continuous jam with a free-flowing song structure relying heavily on improvisation that creates a playful environment for the listener, making a lot of their shows feel like one giant killer house party.

Drawing inspiration from artists such as David Bowie, the Yeah Yeah Yeahs, Wess Montgomry, and Muddy Waters this band has pretty old school influences for such a young new band. I caught up with Ethan Reoch (guitarist), Tijash Barreno (bassist), and Greta Peart (vocalist) the day after their solo Friday night show at O’Hanlons.

Q: How long have you guys been jamming together?

Ethan: We started off me, Tijash, and Ringo and started playing lots.

Tijash: Two years ago, 2014. I doubled checked before we came here just to make sure we had everything straight. It was the spring of 2014. We got asked by the guitar player for Generator – his name’s Artem – to do a show and I said, “Well I don’t really have a band,” and he said, “Well you guys can play instruments right?” So I was like “Well, yeah” and then we figured that it sounded better if I played bass instead of also playing guitar ‘cause Ethan was just, like, wicked good at guitar. Greta, she met us last summer, so it was, like, a year where it was just instrumental.

Greta: I saw them at the Exchange and I was like, “Who are these punks?” I was like, “These guys would be ok if they didn’t have seven people rapping for them.”

Ethan: It was pretty funny, though, like, Tijash started playing bass like four days before the first Hoodoo Man show and then Greta, the first day we met her, was actually like, [we] played a show that night with her at a house party. So it was pretty like last minute.

Q: How do you feel about the show last night?

T: I was super happy about it.

E: It was pretty lit. I felt really good. I feel like each show we’re improving in some way.

G: See, I feel that way, but at the moment I don’t. It’s just kind of the reaction from the people when they’re like “Oh, you’re better every time!” I’m like, really? I didn’t sing the whole week so last night was kind of hard on my throat.

T: I mean over all it’s really good and it was a milestone too because other than Ringo’s Dad’s birthday we’ve never played a show where it was just us. That was the first time.

Q: Do you guys have any favourite venues to play in town?

E: Definitely the Mercury for me.

T: It doesn’t take you out of your setting.

G: Yeah, it’s small, so it looks like you have a lot of people.

T: The only bad thing is if you come to watch and you’re a little bit shy, you’re not going to have the best time because there’s people spilling beer.

T: Well, and for playing, that’s exactly what you want. You want to fight to be at the front but at the same time you don’t want somebody’s grandma getting elbowed.

G: Yeah, I’m the first to the back when that breaks outs.

Q: What genre do you think the band falls under or would you prefer not to limit yourself to a specific genre?

E: We’re all over the place. We were just talking about it on our way over here.

T: We’ve been called fusion before.

T: It’s more so we just go from on to another. The foundation is blues, rock n’ roll, and then we can get funky with it

E: The funk is like the bridge between the hip-hop stuff and the blues.

T: Yeah that’s the bridge so it’s never like we’re trying to combine a bunch of things at once its more like we progress [through the different genres].

G: I mean me coming from my songs I don’t even know what genre I would consider them.

E: It’s pretty all over the map.

T: Well, like, on our Facebook, ‘cause people ask us a lot, it just says, “inspired by blues, funk, and jazz melodies.” I think that’s what I put down, ‘cause, like, even in the songs that don’t necessarily sound like jazz its just like where the influence is with Ethan’s guitar playing and then the blues 100 per cent and then the funk that’s for me what I love to play on bass. Like, how we came up with the hip hop jams is with a funky bass line.

Q: Have you recorded anything yet or are you still in the process of starting?

T: There’s, like, a rare stock of a few CDs that are in circulation.

G: I took it to my uncle. I wanted to show him because we had been talking about it. He puts it on, listens to it for a minute, and he’s like ell your guitarist is quite good but you can’t even hear your vocals.

E: Yeah it was just a live recording, which we find we play way better live because it’s not note-for-note. We kind of jam and do transitions on the spot. So, we’re just trying to figure out what the best way to record it would be except for producing it ourselves.

T: I think the energy in a studio is better for a singer but for bass or guitar not so hype. For drumming, I know Ringo. Like, he might have found it hard ‘cause, like, we tried it in Saskatoon.

E: It’s so much pressure. You got the beat counter on and you’re just like, “Ok we’ve got to do this perfect.”

G: Even if you’re used to it, you’ve got to learn to do that eventually, though.

Rousey flick should be next for Hollywood