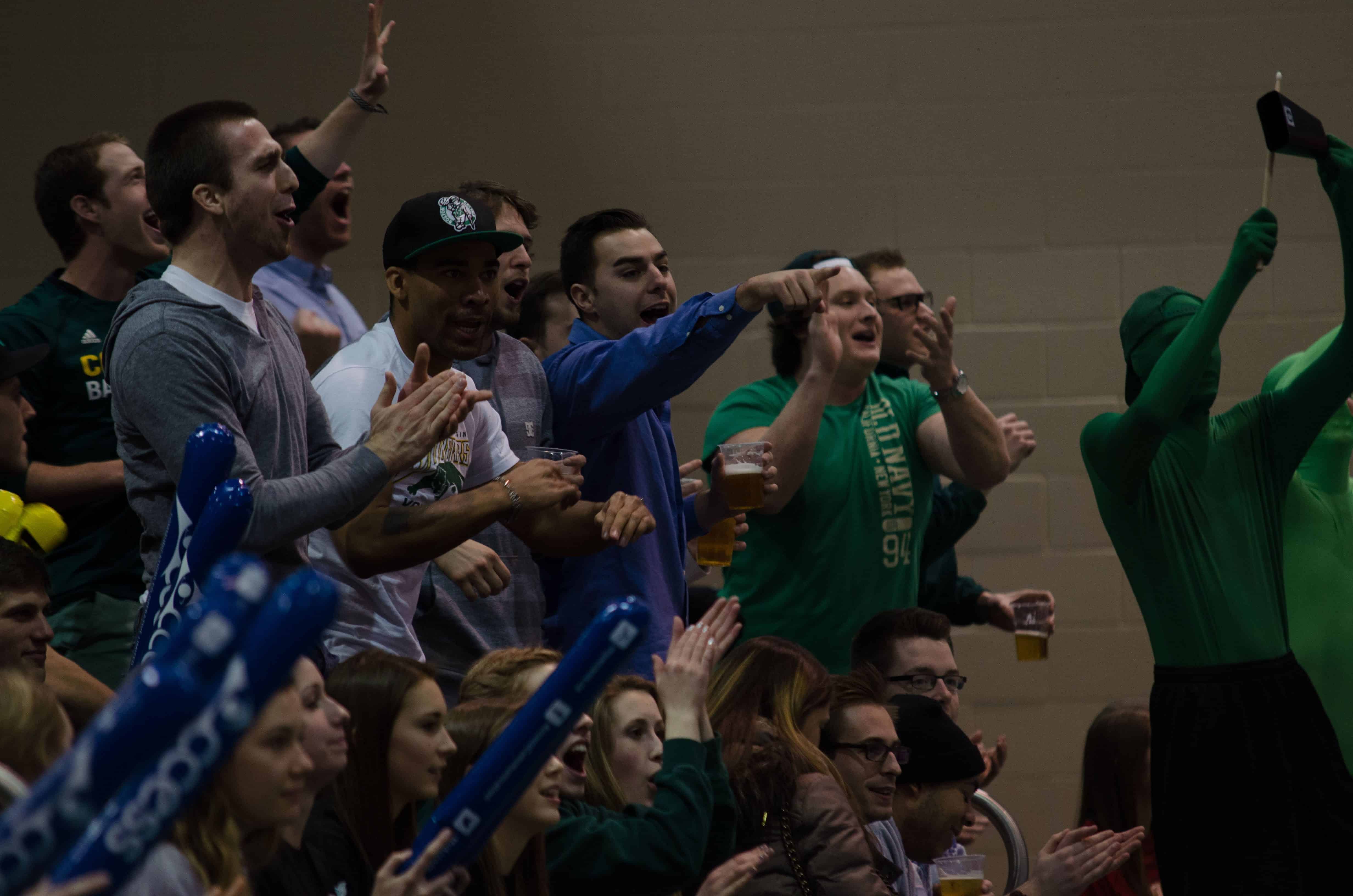 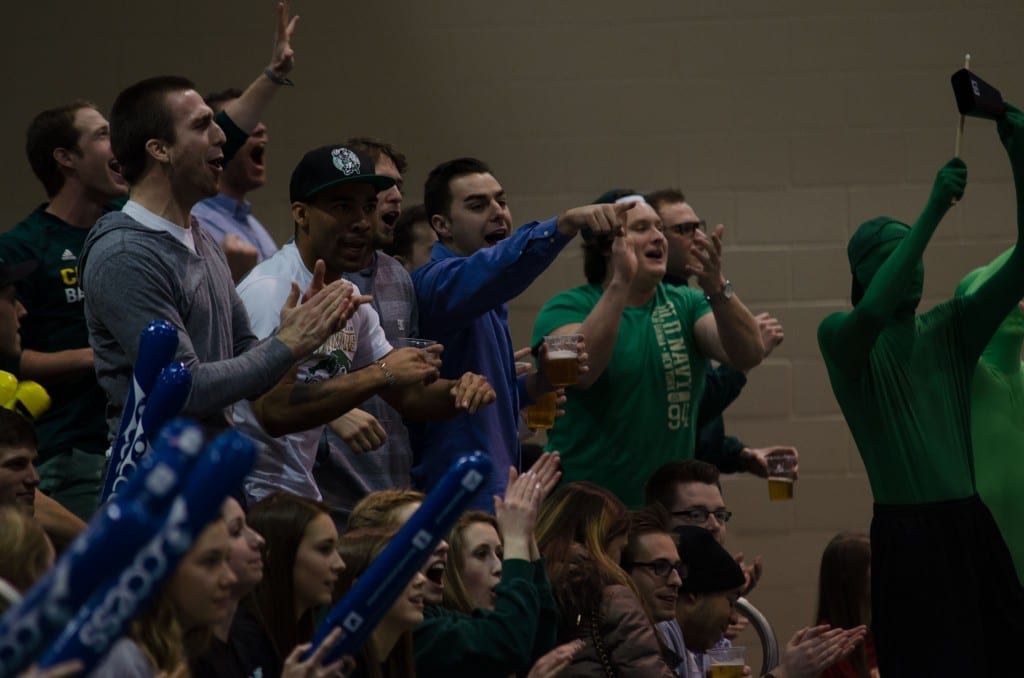 All of them are drunk, be jealous.

Last weekend, we hosted the CIS women’s volleyball championships. Did you attend any of the games to cheer on the Cougars?

Sockett: I did watch the Cougars play UBC, they played pretty good but UBC proved to be the superior team. Despite not actually earning the right to play amongst the best teams in the country, the Cougars shut up all the people, like me, by finishing sixth in the tournament. Congratulations lady Cougars. Hopefully, you continue proving me wrong next season.

Leitch: I would like to say yes, and not get punched in the head by a tall girl, but no, I wasn’t there. Didn’t really care to be, either.

Lang: I went for the gold and bronze medal games but never got out to see the Cougars play. We’ll just blame this one on work… or homework…

McDowell: Despite what many of you probably think, I actually did attend the Cougars first game against UBC… even though they hate me. I was sitting behind this hilarious overzealous UBC fan with blue hair and a cowbell. After that game, I do not need any more cowbell.

Many fifth-year Cougars are playing in their final games of the season or possibly of their careers, which graduating Cougar do you think is most likely to come back as a coach in the future?

Sockett: The Cougars men’s hockey team’s ex-captain Craig Cuthbert; however, its unlikely that Cuthbert would be able to stay healthy the entire season, with his tendency to be hurt and the violent nature of coaching hockey.

Leitch: *Doesn’t bother to look up current rosters for any name* Jim. Or Mike. Those guys are going (coaching) places.

Lang: Desiree Ates has the ability, I believe, to come back and coach. She’s a hometown player and I believe she could benefit whatever team she decides to coach.

McDowell: Someone from the Rams almost always ends up transitioning to coaching after they graduate. With former quarterbacks coach, Marc Mueller, making the move to the CFL as a defensive assistant with the Calgary Stampeders, they have open coaching spots. I’ll say Mark McConkey will be back as a receiver’s coach; he could teach the players a thing or two about being sure-handed.

The NHL trade deadline is just around the corner, if you were the GM of the Edmonton Oilers, would you try to get rid of Nail Yakupov?

Sockett: If I were the Oilers, I’d trade every player on that shit-ass team. None of them have proved that they can get the job done. What are they on? The Leafs 20-year-rebuild strategy?

Leitch: I would drop that bastard like a bad habit. He’s so bad, he makes medicine sick, but not in the cool, Muhammad Ali way. More in the terminal illness kind of way.

Lang: Personally, of course I would. He’s a flower. But then again it’s too early to tell his full potential. He will never be dealt by the Oilers until he’s KHL bound in two years.

McDowell: Yes, without a doubt, yes. Something drastic needs to be done to that team to make them anything but a swamp donkey. Yes, they are young, but everyone has been saying they are young for the past five years. Take a chance and trade Yakupov, you can’t have a death grip on every young player you pick up, just in case they happen to turn out well.

The Roughriders haven’t made very many promising moves this off-season. Are you worried for this year’s CFL season?

Sockett: There’s still a lot of time left before the season, so let’s halt the max exodus of fair-weather rider fans. But, seriously, as a real Rider fan, I can’t stand the deal people are making of this. Look back at any professional team to ever win a championship, they get their talent picked dry. They’ll be fine, so all these plum dumb fake fans can stop flapping their gums and put a little faith in GM Brendan Taman.

Leitch: I’m always worried about the Riders until someone informs me that they’re actually performing well. I haven’t forgotten how badly the team sucked half a decade ago.

Lang: I still have faith, but that backfield is looking pretty bare heading into the season….

McDowell: Yes, I am worried. Usually, I am optimistic and have high hopes that I will be placing an early order on a championship sweatshirt. But, at this point, I will just be happy if we make the playoffs this year. I don’t like it when we are sellers, instead of buyers, but so far we seem to have the attitude that since we aren’t hosting, we won’t make an effort to have a strong team.

There are just 16 days until the MLB season opener. Are you excited about this, or do you even care?

Sockett: It will be sad to see New York Yankees great Derek Jeter retire at the end of this season, but lets hope they can rally and bounce back from their piss poor Jays-esque season last year.

Leitch: I’d rather watch flies screw on a wall of drying paint in the middle of a field of growing grass than watch MLB. The only time I was excited about an MLB game was the time that I think I saw Geddy Lee in the stands of a Blue Jays game.

Lang: I care. That means spring is coming, which means that I can watch the Red Sox defend their title and be able to not deal with A-Rod drama!

McDowell: I don’t overly care, but I don’t not care – if that makes sense. I haven’t been super interested in MLB in the past; I watch the highlights, but that’s about it. Baseball is America’s pass time, not Canada’s. Having said that, with the MLB starting, that means the WMBL is starting, and I am very excited for that. Hopefully our Regina Red Sox can get back to their championship ways.

A tournament to remember