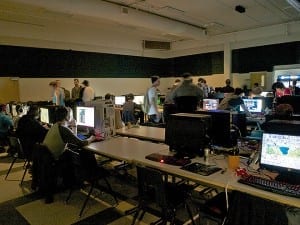 Over the weekend, SaskGamers, a university club, held a 30-hour LAN party. The event included games such as League of Legends, Counter-Strike, Dota 2, Starcraft 2, Team Fortress 2, Hearthstone, Rocket League, and Smash Bros. If people were interested in some old-school fun, they could even play board games. The event raised money for Children’s Hospital Foundation Saskatchewan, as well as Shinerama, a post-secondary fundraising program for cystic fibrosis. The party also incorporated a Regina Engineering Students’ Society 24-hour live stream to raise money for Extra Life (a grassroots internet fundraising campaign for children’s hospitals).

LAN stands for Local Area Network, meaning all participants in the games were housed in the same facility rather than connected online. In this case, their facility was the multipurpose room in the William Riddell Centre.

People of all ages came to the event trying to capture some of the 2000 dollars in cash and prizes available. Tournaments were held for both battle arena type games Dota 2 and League of Legends, as well as first-person shooter Counter-Strike: Global Offensive. Others came simply to enjoy the LAN environment, and game with some fellow gamers.

Participants had to bring their own computers to join the event. Gaming PCs (colloquially known as “rigs”) ranged from modest laptops to specially-built, four-thousand-dollar gaming computers. One participant even opted for a vintage CRT monitor.

University of Regina student and organizer of the event Taylor Petrychyn says that he was “always optimistic that the event would sell out; we only have three seats empty right now, and I’m sure they’ll be filling up soon.”

And Petrychyn was right – the multipurpose room was filled nearly to capacity for most of the 30-hour event.

Petrychyn said he realized, along with some friends, that Saskatchewan hadn’t had a LAN Party in a while.

“There had been a couple of other LAN events in the past, but five months ago me and some friends were hanging out and we thought, ‘why don’t we try and put on a big LAN party?’ So we thought about it for a while, and then we finally sat down, hammered it all out, got sponsors, and managed to put this together.”

“It’s awesome! I’m really impressed with the turnout. I’ve been going to these things for a while, and the last big one was five or six years ago. And that one was not quite as big as here, so the fact that the first event by SaskGamers is sold out is really exciting.”

Smyth is confident that gaming will only grow.

“As it’s getting more mainstream, more people are picking it up. Also, nowadays you don’t need a huge gaming rig. People here have their laptops [and] the cost of computers is going down. It’s everywhere – there are gaming montages on Facebook, people can stream on Twitch TV and make a living – that all helps grow gaming.”

Fellowship of the Nerds, a League of Legends team at the event, took time to talk to the Carillon as well.

“This is a great event. [Gaming] used to be smaller, and now more and more tournaments and events like this are cropping up. LAN is the best way to play; the environment is way better. Even when you lose, it’s a blast.”

Petrychyn says the SaskGamers events will continue, and he hopes to have them, “once or twice a year.”