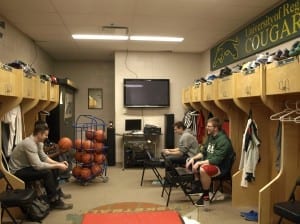 Locker room culture has become a massive problem in sports

When someone is an honoured guest of a sports team, they are often welcomed into the locker room. Seen as a bastion of togetherness, this area is not without flaws.

Locker room culture is a fickle beast. One minute, the person next to you is your best friend and then, quickly, the tables turn and they are, if not your enemy, certainly not someone you want to spend the majority of your time with.

If you don’t believe me when I say that the environment “in the room” is problematic, look at the language used when the locker room is mentioned. A new coach can have a good relationship with his players, but he must have control of the locker room. When said coach gets fired it is often because they have “lost” the locker room, as if whatever Toronto Maple Leafs coach is on the hot seat can find his salvation at Air Canada Centre’s lost and found. The environment is referred to in terms that are better suited to a report on an oil spill like poisonous and toxic

It is within these locker rooms – and extensions of team culture like group suppers and road trips – that dangerous things can brood. Professional sports teams have had problems with homophobia and the rhetoric of those who support the exclusion of LGBTQ athletes from the team environment often reference the locker room. A couple of years ago, prior to the Super Bowl, San Francisco 49ers cornerback Chris Culliver made it known that gay athletes would not be welcome in his team’s locker room, going so far as to say that athletes should wait until ten years after their careers had finished before coming out (as reported by Yahoo Sports). The Jonathan Martin scandal shone an even harsher light on locker room culture and the pitfalls of not fostering a welcoming and positive environment.

So, how do we fix it? Well, we start by getting rid of what the sports world likes to call cancers – those athletes who routinely cause issues in the locker room. The issue with these sportsmen and women is that their athletic gifts are often seen as outweighing any potential locker room impact. While leagues like the NFL hold meetings between players and teams so that character can be evaluated, it is a sad truth that if the person in question runs the fastest, jumps the highest, and otherwise performs well, then they will find a place in the sports world no matter how much of a discriminatory asshole they may be.

However, the blame does not just lie with the players or professional leagues. Youth teams and the environments they foster are also instrumental. If the only way you know how to act behind closed doors is as a self-important idiot, then that approach will translate to higher levels and add to the negative aspects of locker room culture that are alive and well today.