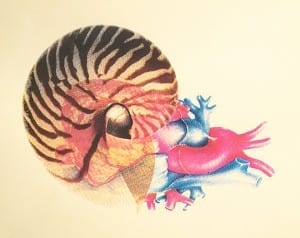 kelly roy’s “use your imagination”
by brett nielsen

Art from the west coast and prairie coast converge

The well-received display — featuring more than a dozen student prints from each the University of Regina and University of British Columbia’s Okanagan campus — runs until Oct. 30 in the Riddell Centre.

In January, the exhibition will be on display at UBC Okanagan in Kelowna, where it will wrap up — at least for the time being.

In addition to giving the general public a good look at the work of students from both the U of R and UBC Okanagan, this exchange exhibition provides a unique professional development opportunity for visual arts students working in print media at the two participating institutions by shining a light on work from both schools.

Participating students have the privilege of having their work showcased in front of a significantly larger audience than they would’ve otherwise been afforded.

“First off, just to be in a gallery show is so important for your C.V. as an artist, because that’s a major part of your credentials,” Lewchuk says. “Then to have your name go out of the province is so important in getting your name out there, especially for an artist.”

Students, Lewchuk adds, also benefit from being exposed to the work of other artists outside of their program.

“It’s definitely been amazing for the students who have come in and seen the different works from B.C.,” the director says.

“They say, ‘Oh, I really wonder how they did that. I wish they were here to talk about their work and the process,’ because there are so many different approaches in print -making. It creates a dialogue because they have the artist’s name and they can seek them out, contact them, and ask, ‘How did you create this piece? I’m really curious.’”

Lacia Vogel, a self-described “interested volunteer” in the project who’s on the verge of finishing her Master of Fine Arts, agrees with Lewchuk that it has been a success.

“The professors seem excited about it, the students are excited and, overall, I think it was pretty successful for a first run,” Vogel says, adding, “I’m sure there will be changes, but I don’t know what they’ll be.”

Vogel says she would be delighted to see the exhibit, which was spearheaded by UBC Okanagan professor Briar Craig, continue next year. Both her and Lewchuk appear to see the project going on longer than that.

“It’s an opportunity to develop into something even bigger,” Vogel says, continuing, “The students here who went to the reception when it opened thought it would be really great if we could expand it to include more schools. This is a project that could grow to expand to include a number of other schools in Canada.”

“(Craig) flew down for the opening reception of the show,” Lewchuk adds. “We talked and he wanted to do this again because the profs and the students really liked seeing other work and really appreciated getting their names out there. We spoke; we’ll definitely be doing this next year, and we’re hoping to add another university as well. Then we’ll have three different universities at three different galleries for this travelling exhibition.”