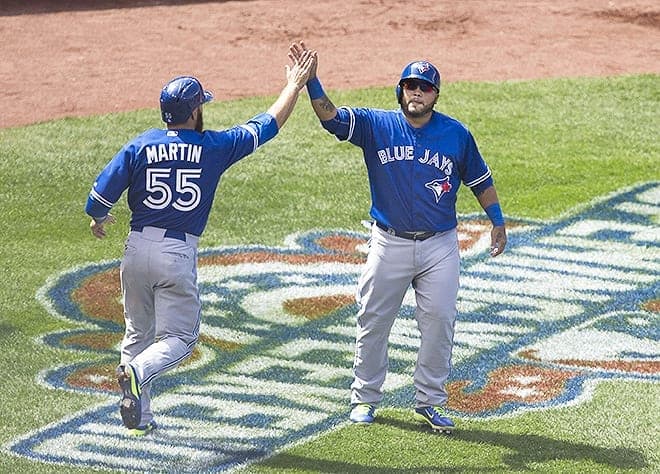 Canada’s team grace playoffs for the first time since 1992

When the idea of a playoff preview for Major League Baseball was brought to my attention, I originally intended to write an expanded story about the entire playoff picture. This swiftly changed as, just moments later, I watched Josh Donaldson absolutely destroy his forty-first home run of the season to walk off for the third time in his season, ending the Blue Jays home regular season schedule. The moment that ball was thrown it was an instantaneous blast, not only off Donaldson’s bat, but within my mind as well, as I was certain this piece needed to revolve around Canada’s team: the Toronto Blue Jays.

Boasting an incredible (by Blue Jays standards) 90-65 record as of Sept. 28, the Jays are looking like they will win the race in the AL East. This Jays team has found a way to take hold of the best record in the AL, only tied with the Kansas City Royals, who most baseball fans would consider an all-star team, though the Jays do hold the tiebreaker. As the playoff picture sits now, the Blue Jays are likely to face either the Houston Astros or New York Yankees in the AL Divisional Round. Though I personally hate to admit it, I thoroughly believe this will lead to a much-anticipated matchup between the Jays and Yankees. Both squads have big bats in the lineup and, I mean, who doesn’t love a homerun here and there? I’ve inquired to a couple of my close, sports-viewing friends about their thoughts on the potential Jays and Yankees matchup, and the majority said, based on history, that they don’t like the matchup for the Jays. To this I said, pshaw. Yes, that’s correct; I want the Jays to play the Yankees.

I don’t want to see them play just because the boys hold a 13-6 record against the Bronx Bombers, but because some of the best baseball I’ve watched all season has come from these two facing off. Collectively, in nineteen games against each other, the Jays and Yankees have posted one hundred and forty-one runs. These one hundred and forty-one runs include a whopping forty-five home runs between both units. If forty-five home runs is not enough foreshadowing for a potentially epic series, I don’t know what is. Perhaps you’re a baseball purist and you love a good pitcher’s duel, thus the homers just won’t do it for you. As a Jays fan, I’d be very excited as the pitchers have absolutely feasted on the New York Yankees (aside from Estrada). The Jays’ ace, David Price, has gone 2-0 against the Yanks in three appearances, having only allowed seven runs against in those three appearances. Young buck Marcus Stroman has seen the Yankees twice and is 1-0, allowing seven runs in one game (having his butt covered by the Jays bats) and then shutting the Yanks out in the other start. The steady, Mark Buehrle, has allowed one run in one start and one victory against the Yankees. Needless to say, the Jays are comfortable with putting anyone on the mound against any team on any given night, particularly New York.

The aforementioned bats of the Toronto Blue Jays are also able to give a much-needed level of comfort ability when it comes to seeking wins come playoff time. The Jays currently lead the MLB in runs by a flabbergasting 112 runs. The Jays also lead the league in home runs with 222 and in SLG (slugging percentage) with .455. The impact of their powerful bats cannot be understated. Just as they’ve been known to in the past, the Jays life-force thrives on hitting the ball to the second deck. When watching the Jays as their bats really start to heat up, it’s like watching a homerun derby. Every at bat taken by a Jays player seems to look like they’re competing against their fellow Jays in a battle of who can hit the ball further.

These hard hitting bats, of course, lead to many an RBI. The Jays lead the league again, as they have posted 104 more RBIs than the second place Yankees. So, knowing and understanding the Jays’ pitchers’ ability versus the Yankees, and seeing that the numbers don’t lie when it comes to their offense, the only remaining question is can the fielding of the Jays keep up? In short, to answer this question, I give a resounding yes. Players the likes of godly outfielder Kevin Pillar, the impeccable and irreplaceable Josh Donaldson, and the eventual return of shortstop phenom Troy Tulowitzki, will have hitters shaking in their proverbial boots. Lest we forget David Price likes to catch comeback liners behind his back, so that’s cool.

The outlook for the Jays heading into the 2015 postseason is certainly positive, regardless of whom they face, as they’re competing in a time of the year that this organization hasn’t seen in twenty-two years. The crowds will be intense and ear-poppingly loud, the vendors will be serving only the best of the best peanuts, and the Jays will be attempting to do once more what they’ve done all year, win when it counts. Homeruns are in the near future in Toronto during the month of September, and so too are studly pitching showcases. Kevin Pillar will most certainly be finding himself on the highlight reels. Jose Bautista and Edwin Encarnacion will be spotted hugging intensely, though in a really masculine way. Josh Donaldson will be talking to the clouds about how much rain he’s going to be bringing. Marcus Stroman will be showing everyone why he is the next ace in Toronto. David Price will be striking out anyone who dares stand at his plate. Most importantly, the Jays will be raising a World Series banner come 2016, or at least this writer can dream they will.