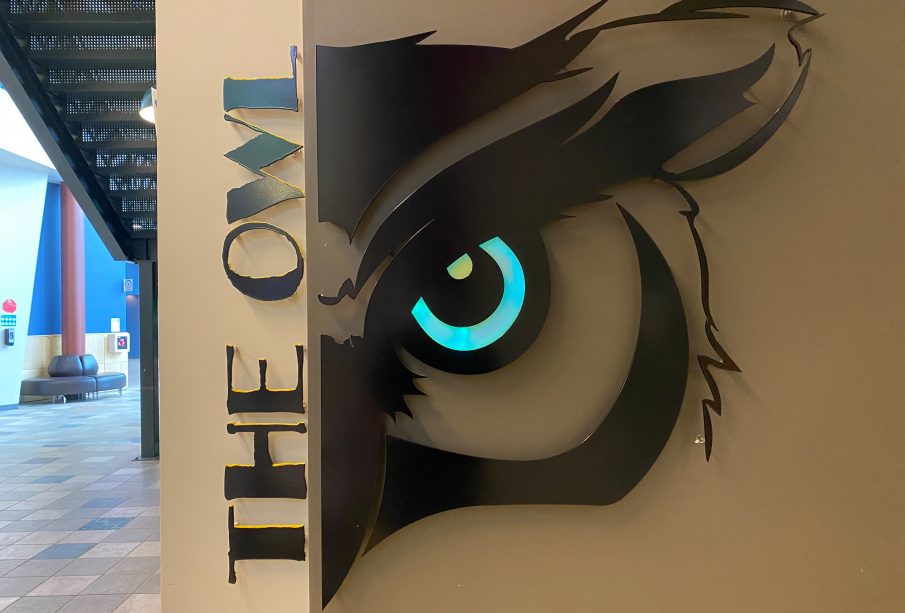 The Lazy Owl: too lazy to add Lazy to their old Owl. Hannah Eiserman

Come for the empty Cabela’s feeling, stay for the clamato on tap

Food services at the University of Regina are sparse right now. Until the winter semester begins, we have Extreme Pita, the newly opened Tim Hortons and Momentum Café, and URSU’s own Lazy Owl, which re-opened in September with a new name and new menu since it closed in 2020. And it’s interesting, to say the least.

The hours are strange: 9 a.m. to 7 p.m. and only on weekdays is certainly a choice. It eliminates the ability for students to go out drinking with friends on Friday nights, or to go out for drinks on the weekend at all.

Since I’m only a second-year student, I can’t tell you what the old Owl looked like before the rebrand. (Editor’s note: For some reason, the rebrand did not actually include décor changes of note). But the new one has a very strange atmosphere. It has the same atmosphere as a Cabela’s right before closing, except sometimes they’re playing a morning talk show where they talk about shoes on the TVs. The combination feels like a breach in The Owl’s aesthetic.

The new menu is seemingly very fancy – unnecessarily fancy. And poorly executed in its fanciness, to boot. I don’t need a salad with chickpeas and dried cranberries when a basic chicken caesar salad would do the job just fine. The options aren’t varied. There are only two vegetarian options, and that’s it. And no, the vegetarian options are not the salad or the veggie wrap, despite both of those things being mostly vegetables. The vegetarian options are actually the poutine and the cauliflower bites.

Similarly, there are very limited halal options. There is the aforementioned poutine, two chicken burgers, and the Cali club. Yet, despite the chicken being listed as halal in the Bacon Cheddar Burger and the Cali Club, there is also bacon in both those meals. It just doesn’t make sense to list a meal as a halal option but then put something non-halal in the meal.

The salad dressing they have for the caesar salad side with the grill orders has an aggressive amount of garlic, yet still somehow tastes watered down. If you get the fries that come as a side dish for many orders in the evening, they often taste like they were cooked earlier in the day instead of fresh.

For Christmas, they have a cranberry buffalo wings option, and I am very confused. Tart and spicy seem very strange together. I guess I still haven’t eaten an orange since my last article, so I can’t say much about strange fruit flavours.

Also, despite being a student-union restaurant, it’s kind of pricey. I can’t always afford to spend $15 on a meal alone and then spend $3 on a fountain drink, clamato or not. But let’s talk about the good things at the Lazy Owl. The seasoned fries are very well-seasoned. It’s a good combination of spices. The breakfast skillets are huge. It comes in a massive bowl and looks daunting to finish. It’s a large amount of food for $12. The Long Island Iced Tea tastes like those gummy coke bottles. The cinnamon buns are pretty good. Though I don’t drink, multiple sources have told me the Lazy Owl buys good tequila. Hopefully, in the future, the Lazy Owl will have more options for varied diets, and make the atmosphere feel less like a nearly closed Cabela’s