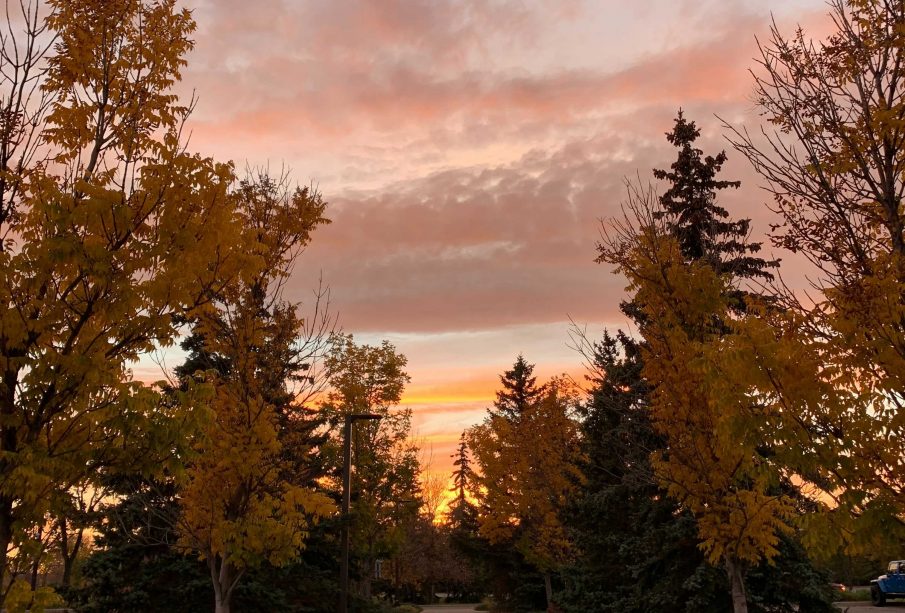 The world may be frying us alive but at the least the sky is Instagram-worthy. Sarah Nakonechny

Every summer, I am in awe of how beautiful the prairies in general, and this city in particular, can be. In fact, I joke with friends that every summer I forget what winters are like and wonder why more people do not come live here. Then, sometime around early November when it hurts to breathe, I remember what lies ahead for the next several months. Again, spring eventually arrives before we rinse and repeat.

Except so far, this past year has been different. I am originally from a warm tropical climate, where mid-40s Celsius is not uncommon. However, back home, offices and homes are built with this information in mind. This past summer, as Regina has consistently hit high 30s and low 40s, it was far worse to deal with given the sort of insulation buildings here tend to have – not to mention, the sunlight just seems so much more intense for whatever reason. A part of me is also worried about how little rain we got. To be completely honest, most of my concerns were about how the drought will affect the harvest, and how the potentially poor harvest will in turn affect the price of food in the coming year. Whenever you are on the verge of being broke, the notion of having to spend more on food is not a very welcome one. We did get some late rain, but I understand by then it was too late for the farmers. All things considered, I was certainly looking forward to fall, if not quite the harsh prairie winters.

Except now fall is here, and things do not seem to be that much better. I have only lived in Regina since 2016, and this has easily been the warmest fall I have experienced since moving here. In conversations, people who have lived here for decades have also remarked on how this is definitely a very unusual September in terms of weather. At least three times over the month I remember the high of the day passing the 30-degree Celsius mark. Even late nights and early mornings have barely dipped below zero, and when they eventually did, we were already practically at the end of September. Optimistically, some news reports have been talking about how Saskatchewan might be looking at a rather mild winter, with minimal snowfall.

While I have to admit that the idea of a mild winter and not as much snow sounds very tempting for someone like me who relies on a combination of public transport and walking to get around, this year does represent a very abrupt change in the usual patterns of our province. Though maybe not too abrupt, now that I think of it. We have been told for years now that climate patterns are changing, and that the earth is headed towards a grim future. I do, however, feel the need to clarify one thing: the Earth will change, sure, but it will in all likelihood still be here for several million years more. What we should be saying is that climate patterns are changing, and unless we do something about it, we – humans – will not be here much longer. I might not love snow (well, to be honest, I sort of do), but regular rain and snowfall nourishes and prepares the land for planting and harvesting.

Maybe I am overthinking and/or being overly pessimistic. I will be the first person to admit that both of those are things I tend to do quite a bit. Maybe I should just be glad we are getting bright sunny afternoons this late into the year, and soon the usual prairie weather will be back, and Saskatchewan will, on some days, be colder than anyplace on Earth (or Mars).

A part of me, though, is still a little uneasy. I have often seen how in the face of natural disasters and calamities in general it is always the common person whose life is disrupted the most. The billionaires are already working on their space colonies, and I cannot help but feel like one of Noah’s neighbours wondering what the arc is for…

From womb to tomb – the story of a twin

More than one way to use a ballot

Hammad Ali will write for food.