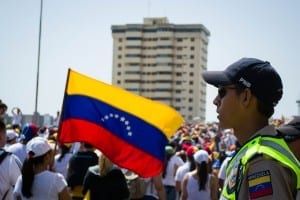 A summary and examination of recent protests

National Youth Day in Venezuela is held annually on Feb. 12. This holiday has been celebrated every year since 1847, but this year was particularly special. It is the 200th anniversary of the Battle of La Victoria, an important victory in the Venezuelan war of independence, which National Youth Day commemorates.

They call it ‘youth’ day because of the participation of many young students in the fighting.

Two centuries after this step away from Spanish colonial rule, many young people in Venezuela claim to be fed up with social insecurities due to crime, scarcity of food and other necessities (including toilet paper), corruption in government, devaluation of their currency, inflation, lack of economic freedoms, and censorship.

According to the New York Times, Venezuela has the largest oil reserves in the world, making Venezuela’s lack of basic goods and its economic problems seem unnecessary. As is common in Venezuela, citizens have taken to the streets to voice frustration with their government.

President Nicolas Maduro says he’s not going anywhere, and continues to have support among those loyal to the legacy of his predecessor, Hugo Chavez.

However, this support is waning. Last April, Maduro’s government won a slim election victory only weeks after the death of Chavez. According to the New Republic, he took 50.66 per cent of the vote to the opposition’s 49.17.

There were protests following the election where six people were killed. Shortly after, these protests spread to include wealthier regions where people are echoing these sentiments of anguish and disdain for the current pervasive order.

“I’m tired of queuing to buy, I’m tired of kidnappings and the violence that continues each day,” explained Maria, a 37-year-old accountant who is part of the protests, to the CBC.

In cities such as Caracas, some neighborhoods are completely isolated from others with improvised roadblocks made up of pipes and trash. Protestors with the intention of separating neighborhoods from the cities core set up these roadblocks.

The current protests have not been peaceful either. The CBC reported that the Venezuelan government puts the death toll at 15 people, with 150 wounded. Also, 579 people have been arrested during the unrest according to Attorney General Luisa Ortega Diaz.

Among those arrested is Leopoldo Lopez, a political rival of Maduro. He was detained originally for “criminal incitement of violence”, among other charges, for allegedly organizing the National Youth Day rally.

The charges against him have recently been reduced to destruction of private property, according to Der Spiegel.

The Guardian reported that on Feb. 27, several members of the Bolivarian National Intelligence Service (BNIS) were arrested on murder charges stemming from the Feb. 12 protest where Bassil Da Costa, a 24-year-old student, was killed and others were shot.

Protests are happening all over the country in many different cities. “Militia-like groups” who support the government, called ‘Colectivos’ have taken action in trying to control and intimidate protesters.

Against protesters, the government is also using tear gas, rubber bullets and according to the the New York Times, sending “fighter jets to make low, threatening passes”, where protests are taking place.

These tactics have earned Maduro condemnation from people within his own party.

Maduro is of the opinion that these protests are limited. He claims the grievances of his opposition are being exaggerated and that, the opposition is funded by American imperialists looking to take down the democratically elected government.

Characterizing what appear to be demonstrations by protesters with legitimate grievances in such a way sounds paranoid. But a coup was attempted in 2002, against Hugo Chavez, with American support. The brief, 48-hour handover of power to Pedro Carmona was, reported the Guardian, “immediately endorsed” by the Bush administration at the time.

Prior to the coup, several individuals involved in it, including Carmona, had visited Otto Reich, Bush’s “key policy-maker for Latin America,” at the White House.

But, whether or whether not Maduro has a compelling argument against his political enemies, domestic and abroad, doesn’t matter as much, as he has an incredible ability to control the message within his country.

The United States and Venezuela have had a rocky relationship since 1999, after the election of the late Hugo Chavez. US Secretary of State, John Kerry, denied allegations of supporting any sort of coup currently.

“We’re prepared to have a change in this relationship, this tension between our countries has gone on for too long,” Kerry said in an interview with Al Jazeera. “But we are not going to sit around and be blamed for things we have never done.”

The scope of these protests has come to include socio-economic concerns, with many of the demonstrations taking place in rich neighborhoods, creating tension between the poor and the wealthy in the country.

The dividing wealth line was one of the factors that brought the late Hugo Chavez into office nearly 15 years ago. Nicolas Maduro, intended to carry on Chavez’s socialist revolution after his election, though this has arguably not occured.

Though freedom of speech and the press are constitutionally guaranteed in the country, according to the World Movement for Democracy, in 2004 Venezuela passed a law for “Social Responsibility in Radio and Television.” The law “contains ambiguously worded provisions that have been used to restrict these freedoms.”

Journalists and media organizations can be fined or arrested for criticizing the government as they often equate criticism with “conspiracy against the state”.

The Television station, Globovision, was, for a long time, the only TV station that criticized the government. Last year, it was sold to investors who allegedly have connections to the Maduro administration and the station has since eased up on the regime, the Columbia Journalism Review reported.

Carlos Quiroz is a student here at the U of R and a native of Venezuela. He is used to civil unrest in his home country.

“I wasn’t really worried about anything happening there, just because it happens every couple of years. Every time there’s an election.”

Carlos also adds that “the situation at home is not ideal… the protests are basically because people are tired of living this way and especially because they know it can be better.”

And the Oscar goes to…