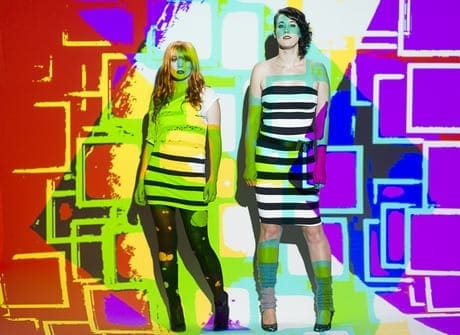 Who would have guessed an opera singer and bassoonist could rock this much?

How do you jump from classical music to indie pop? Quite easy according to Krista Wodelet, one part of the female duo Sidney York.

“We both just got to a place in classical music. We wanted to play our own music.”

Both members of the band have master’s degrees in classical music, so they certainly know their stuff when it comes to that genre. But like Wodelet said, when the music calls, you have to follow.

From an early age, Wodelet has been playing music. She started with the piano then just kept on moving up.

“In junior high, I joined the band program and ended up playing bassoon because I couldn’t make a noise on any brass instrument and I didn’t want to pay anything high, so bassoon was the default.”

Sidney York was formed by happenstance. Wodelet’s sister, who worked as an airline attendant at the time, met Brandi Sidoryk at work. Sidoryk, who was also an attendant, mentioned to her co-worker how she was looking for a member to be a part of her band. Particularly, she wanted a bassoonist, which is exactly what Wodelet happened to be. Go figure!

From there, the ladies started playing together and in 2011 they put out their first album titled Apocalyptic Radio Cynic. While the album was a success, the ladies decided to try something different. They began to write the music more collaboratively, making their music more a part of the two of them instead of just one.

Wodelet describes the three year reprieve as an intense period of rebuilding.

“We spent three years doing a lot of writing and playing together. We experimented with sound. The collaborative writing process was new to the both of us, too.”

What seems to some as a hiatus, Wodelet says was really active from the band’s perspective. Their new record <3s (Hearts) is something both ladies are excited to have finally released.

“We want to let people know what we’ve been up to.”

This new album isn’t like one you’d typically find on iTunes. For starters, the EPs will only have two songs each, and there will be a total of five released. Wodelet says this new way of releasing their music is a fun way to get their music out there.

“The traditional model of just releasing a CD doesn’t necessarily make that much sense anymore because people are consuming music digitally.”

She says if anyone is going to purchase a physical album, they’re going to buy vinyl. That’s another neat thing Sidney York is doing – if you don’t want to digitally download their music, you can order vinyl copies.

Along with the EPs, the ladies are collaborating with a graphic artist in Calgary who will do a poster that goes along with every song on the EPs. The EPs will be released two songs at a time which will give the group a chance to do the whole description model instead of just putting out the whole thing and being done with it.

Sidney York started their tour to promote their new album on Jan. 7 and since then they have been all over North America. On Jan. 28 the ladies will be playing in Regina at O’Hanlon’s Pub.

It’s only the Golden Globes

What the Puck? – Olympic dreams